“VOTE THE GOLD CARD FOR CHANGE!!”

We are the largest stockholder of SandRidge Energy, Inc., with a position of 4.8 million shares constituting 13.6% of the company’s outstanding stock. We recently filed our definitive proxy statement with the Securities and Exchange Commission regarding our campaign to replace the entire board of directors of SandRidge at the upcoming 2018 annual meeting of stockholders. We believe this drastic measure is warranted because, since emerging from bankruptcy, the board has exhibited a clear and consistent pattern of failure. Time and again the board has failed to understand and address the concerns of stockholders and has only acted when threatened with legal process or open stockholder revolt. And yet, remarkably, they still seem not to have gotten the message.

The company’s proxy statement states: “Since [emerging from bankruptcy], the Board has overseen significant accomplishments, and we are proud of the results that our Company delivered during a challenging period.” Proud of the results??!! The board seems to be describing an entirely different company than the one I and other long-suffering stockholders are familiar with, because the only “accomplishments” I am aware of are the following (and pride is not the emotion that comes to mind when reflecting on them) –

Because of our repeated demands that SandRidge clarify the language to permit stockholders to fully exercise their right of free assembly without fear of triggering the massively dilutive consequences of the pill, ultimately culminating in a threatened lawsuit, the board was forced to back down and amend the pill to delete the offensive provision. The company’s filings with the Securities and Exchange Commission do not disclose the cost to stockholders of this ill-advised gamesmanship by the board but we are confident, based on the board’s history of wasteful spending, that it was not insignificant. we do not believe the incumbent directors may simply hide behind “business judgment” to explain away this corporate waste but rather should be required to demonstrate how their actions do not constitute gross negligence or a breach of the duties they owe to sandridge and its stockholders.

We believe the actions outlined above demonstrate what little regard the board has for stockholders. The owners of SandRidge must act NOW to take back control of their company. The choice is yours. You can vote for the incumbent directors on management’s slate, who we believe have already proved they are acting in the grand tradition of the previous managements and boards of SandRidge – that is, disregarding the interests of stockholders at every turn – or you can VOTE FOR CHANGE by electing our slate of highly-qualified nominees.

The incumbent directors are reminiscent of Keystone Cops with one discernible skill: they have proven to be quite adept at delivering extravagant stockholder-funded gifts to bankers and lawyers for advising on failed deals and concocting devilish schemes to disenfranchise the company’s owners and to former executives for driving SandRidge into bankruptcy and erasing billions of dollars in equity value. we believe these directors can and should be called to task for countenancing such highly questionable payments.

We, on the other hand, have created hundreds of billions of dollars of value for stockholders over the last 30 years by convincing boards and CEOs to take the steps necessary to greatly increase the value of their companies. Several well-known examples include Texaco, RJR Nabisco, Kerr-McGee, Time Warner, Motorola, ImClone, eBay, Forest Labs and National Energy Group, as well as many others. Unfortunately, it often took years for management and the boards of those companies to agree that we were correct. However, the current situation at SandRidge is too time-sensitive to wait years, especially when every single stockholder with whom we have spoken believes management’s current plan (or lack thereof) is insufficient.

Compare the incumbent director slate to our slate of highly-qualified nominees.

THERE IS NO COMPARISON

Collectively, the incumbent directors (together with the named executive officers of the company) hold less than 1% of the outstanding shares of common stock of SandRidge, which tells us all we need to know about the confidence they place in their own abilities to right this sinking ship. 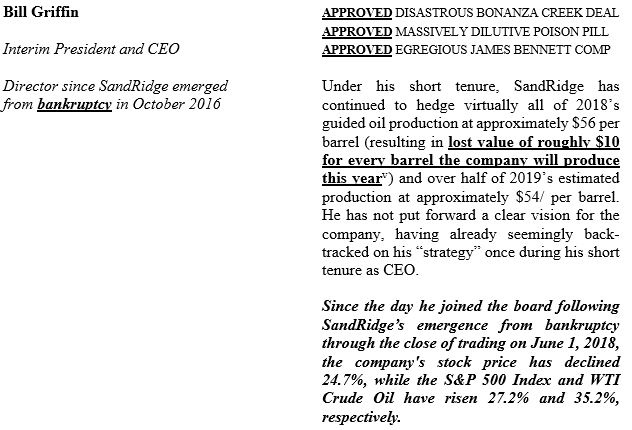 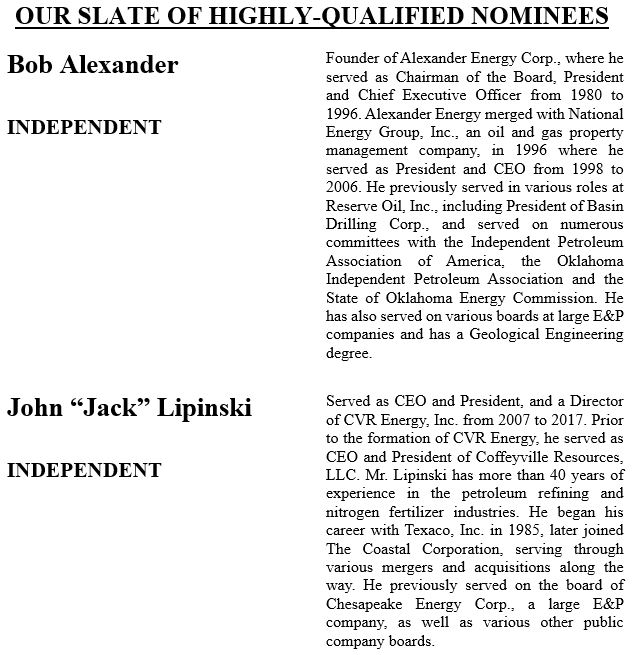 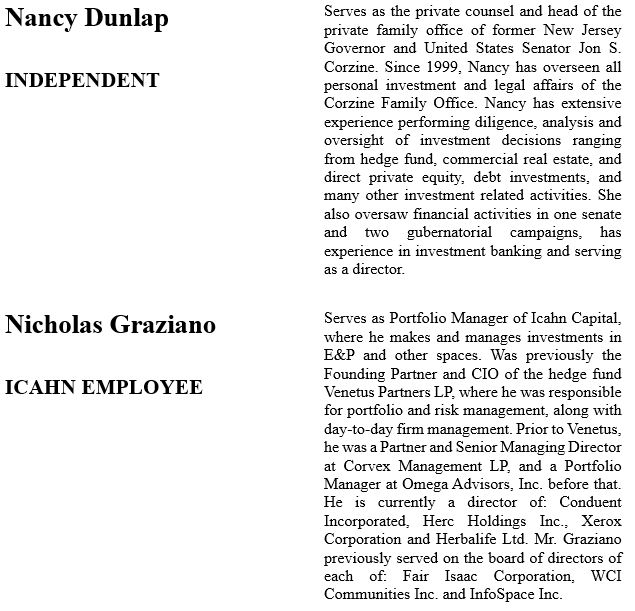 The choice is yours. Do you wish to allow the current board to run your investment in SandRidge? We certainly do not. After our experience with these directors and judging how they have disregarded the interests of stockholders, we do not trust them and want absolutely nothing to do with them. The company’s representatives have reached out to us on numerous occasions offering us minority representation on the board, but we have advised them in no uncertain terms that the only satisfactory resolution of our differences will be the replacement of the entire board. We therefore urge you to rip up the company’s white card and vote our GOLD card –

Additional Information and Where to Find it;

Participants in the Solicitation

SPECIAL NOTE REGARDING THIS LETTER:

THIS LETTER CONTAINS OUR CURRENT VIEWS ON THE VALUE OF SANDRIDGE SECURITIES AND CERTAIN ACTIONS THAT SANDRIDGE’S BOARD MAY TAKE TO ENHANCE THE VALUE OF ITS SECURITIES. OUR VIEWS ARE BASED ON OUR OWN ANALYSIS OF PUBLICLY AVAILABLE INFORMATION AND ASSUMPTIONS WE BELIEVE TO BE REASONABLE. THERE CAN BE NO ASSURANCE THAT THE INFORMATION WE CONSIDERED AND ANALYZED IS ACCURATE OR COMPLETE. SIMILARLY, THERE CAN BE NO ASSURANCE THAT OUR ASSUMPTIONS ARE CORRECT. SANDRIDGE’S ACTUAL PERFORMANCE AND RESULTS MAY DIFFER MATERIALLY FROM OUR ASSUMPTIONS AND ANALYSIS.

WE HAVE NOT SOUGHT, NOR HAVE WE RECEIVED, PERMISSION FROM ANY THIRD-PARTY TO INCLUDE THEIR INFORMATION IN THIS LETTER. ANY SUCH INFORMATION SHOULD NOT BE VIEWED AS INDICATING THE SUPPORT OF SUCH THIRD PARTY FOR THE VIEWS EXPRESSED HEREIN.

THIS LETTER ALSO REFERENCES THE SIZE OF OUR RESPECTIVE CURRENT HOLDINGS OF SANDRIDGE SECURITIES RELATIVE TO OTHER HOLDERS OF SUCH SECURITIES. OUR VIEWS AND OUR HOLDINGS COULD CHANGE AT ANY TIME. WE MAY SELL ANY OR ALL OF OUR HOLDINGS OR INCREASE OUR HOLDINGS BY PURCHASING ADDITIONAL SECURITIES. WE MAY TAKE ANY OF THESE OR OTHER ACTIONS REGARDING SANDRIDGE WITHOUT UPDATING THIS LETTER OR PROVIDING ANY NOTICE WHATSOEVER OF ANY SUCH CHANGES (EXCEPT AS OTHERWISE REQUIRED BY LAW).

Important factors that could cause actual results to differ materially from the expectations set forth in this letter include, among other things, the factors identified in SandRidge’s public filings. Such forward-looking statements should therefore be construed in light of such factors, and the Participants are under no obligation, and expressly disclaim any intention or obligation, to update or revise any forward-looking statements, whether as a result of new information, future events or otherwise, except as required by law.

[iii] Based on the closing price following the announcement and the volume weighted average price of SandRidge stock over the 30 days preceding the transaction announcement on November 15, 2017.

[v] Based on year to date spot WTI and NYMEX Strip pricing as of the date of this letter.

Open letter to Southwest Gas board of directors