“THE PROXY ADVISORY EXPERTS ARE IN AGREEMENT:

THIS BOARD IS IN SEVERE NEED OF

“BETWEEN ISS AND GLASS LEWIS, THE ADVISORY FIRMS HAVE COLLECTIVELY ENDORSED FOUR OF THE ICAHN NOMINEES”

We are very pleased that the leading proxy advisory firm Institutional Shareholder Services Inc. (“ISS”) has weighed in on our proxy contest to replace the board of directors of SandRidge Energy, Inc.:

FOR 3 of our highly-qualified nominees and

Among a myriad of other concerns, ISS noted:

ISS stated: “The dissident has presented a compelling case that additional change is warranted at the board level…Shareholders could be inclined to think of the board’s recent efforts as reactive or too little, too late. Considering the value stakes for a company engaged in a high-risk business, it seems reasonable for shareholders to seek assurance—or insurance—that the board’s actions going forward will be much more proactive than reactive. Calibration of an effective level of dissident representation is one of the most direct means by which shareholders may do so.”

ISS also stated: “Following SandRidge’s emergence from bankruptcy, shareholders appeared to favor a focus on operational improvements to drive higher profitability, as growth-oriented acquisitions had been one of the factors that drove the company to file for bankruptcy. To this point, the degree of missed communication and disconnect between the board’s initial assumptions and the actual desires of the shareholder base is remarkable…The board’s costly failure to communicate effectively with shareholders, which produced significant financial and opportunity costs as a result of the abandoned Bonanza deal, does raise a specter of doubt as to how well the incumbent board might run the pending strategic review.”

ISS stated further: “It is reasonable to expect these directors to have been acutely aware of the missteps that contributed to SandRidge’s path to bankruptcy, as well as the lax governance exhibited during those years, such as egregious related-party transactions involving the former chairman/CEO. Thus, it would also be reasonable to expect the incumbent board to have exercised much tighter oversight of a management team which, unlike the board, did not change over as a result of the bankruptcy process.”

Additionally, ISS stated: “The incumbent board itself, in offering seats to dissident nominees Lipinski and Read, has already attested to the fact that these individuals may be effective contributors. Given their professional backgrounds, these two nominees indeed seem well positioned to assist the board. In highlighting some of the company’s governance missteps, however, the dissident paints a picture of a board that could benefit not only from the addition of these two nominees, but also from more direct oversight by a representative of a significant shareholder.”

ISS stated: “The originally stated intent for the pill is no longer valid. The pill also has a contentious history including a dissident threat of litigation before the board removed the “acting in concert” language and increased the trigger from 10 to 15 percent…Yet a little over a year after emerging from bankruptcy, the board greenlighted a transaction that was roundly rebuked, suggesting a clear disconnect with the desires of shareholders. In seeking to salvage that deal, the board initially adopted a poison pill whose creativity was only rivaled by its outrageousness, perhaps providing shareholders who lived through the governance issues of past years with an uncomfortable sense of déjà vu… A vote AGAINST this proposal is warranted.”

AGAINST the board’s proposal to approve egregious executive compensation

ISS stated: “A vote AGAINST this proposal is warranted…Pay-for-performance concerns remain…The outgoing CEO received over $17 million in connection with his termination. While the company determined the CEO’s termination was “without cause,” a termination which would normally carry severance of 12 months base salary, SandRidge’s recent emergence from Chapter 11 bankruptcy constituted a change in control, significantly increasing the value of his severance. Therefore, instead of cash severance of $915,000, CEO Bennett was paid more than seven times that amount, with cash severance of $6.7 million. While common market practice dictates larger severance packages in the event of a change in control, shareholders may question the inclusion of bankruptcy emergence as a change in control for severance purposes. Equity awards were also accelerated in full upon his termination, including recent grants and performance awards, deemed earned at target.”

THE INCUMBENT BOARD HAS STATED:

“Since [emerging from bankruptcy], the Board has overseen significant accomplishments, and we are proud of the results that our Company delivered during a challenging period.”

ARE THESE THE RESULTS THEY ARE PROUD OF??!!

THE ARCHITECHTS OF THIS UNMITIGATED DISASTER

Collectively, the incumbent directors (together with the named executive officers of the company) hold less than 1% of the outstanding shares of common stock of SandRidge, which tells us all we need to know about the confidence they place in their own abilities to right this sinking ship. 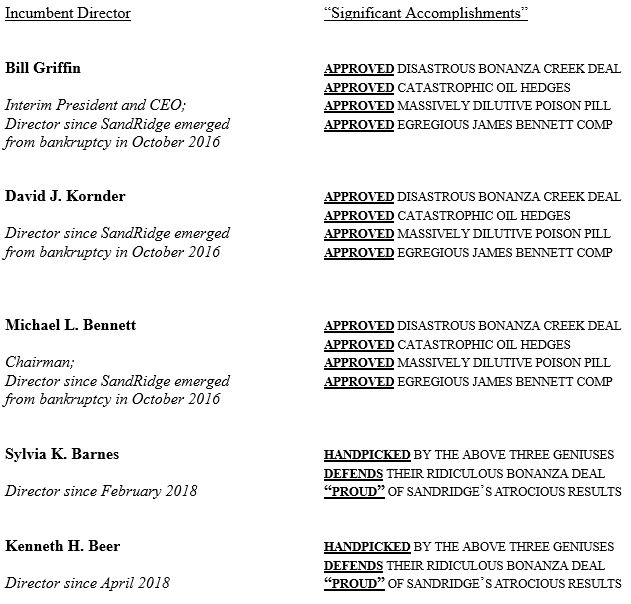 VOTE THE GOLD CARD FOR CHANGE!

The owners of SandRidge must act NOW to take back control of their company. The choice is yours. You can vote for the incumbent directors on management’s slate, who we believe have already proved they are acting in the grand tradition of the previous managements and boards of SandRidge – that is, disregarding the interests of stockholders at every turn – or you can VOTE FOR CHANGE by electing our slate of highly-qualified nominees.

The choice is yours. Do you wish to allow the current board to run your investment in SandRidge? We certainly do not. After our experience with these directors and judging how they have disregarded the interests of stockholders, we do not trust them and want absolutely nothing to do with them. The company’s representatives have reached out to us on numerous occasions offering us minority representation on the board, but we have advised them in no uncertain terms that the only satisfactory resolution of our differences will be the replacement of the entire board.

Additional Information and Where to Find it;

Participants in the Solicitation

SPECIAL NOTE REGARDING THIS LETTER:

THIS LETTER CONTAINS OUR CURRENT VIEWS ON THE VALUE OF SANDRIDGE SECURITIES AND CERTAIN ACTIONS THAT SANDRIDGE’S BOARD MAY TAKE TO ENHANCE THE VALUE OF ITS SECURITIES. OUR VIEWS ARE BASED ON OUR OWN ANALYSIS OF PUBLICLY AVAILABLE INFORMATION AND ASSUMPTIONS WE BELIEVE TO BE REASONABLE. THERE CAN BE NO ASSURANCE THAT THE INFORMATION WE CONSIDERED AND ANALYZED IS ACCURATE OR COMPLETE. SIMILARLY, THERE CAN BE NO ASSURANCE THAT OUR ASSUMPTIONS ARE CORRECT. SANDRIDGE’S ACTUAL PERFORMANCE AND RESULTS MAY DIFFER MATERIALLY FROM OUR ASSUMPTIONS AND ANALYSIS.

WE HAVE NOT SOUGHT, NOR HAVE WE RECEIVED, PERMISSION FROM ANY THIRD-PARTY TO INCLUDE THEIR INFORMATION IN THIS LETTER. ANY SUCH INFORMATION SHOULD NOT BE VIEWED AS INDICATING THE SUPPORT OF SUCH THIRD PARTY FOR THE VIEWS EXPRESSED HEREIN.

THIS LETTER ALSO REFERENCES THE SIZE OF OUR RESPECTIVE CURRENT HOLDINGS OF SANDRIDGE SECURITIES RELATIVE TO OTHER HOLDERS OF SUCH SECURITIES. OUR VIEWS AND OUR HOLDINGS COULD CHANGE AT ANY TIME. WE MAY SELL ANY OR ALL OF OUR HOLDINGS OR INCREASE OUR HOLDINGS BY PURCHASING ADDITIONAL SECURITIES. WE MAY TAKE ANY OF THESE OR OTHER ACTIONS REGARDING SANDRIDGE WITHOUT UPDATING THIS LETTER OR PROVIDING ANY NOTICE WHATSOEVER OF ANY SUCH CHANGES (EXCEPT AS OTHERWISE REQUIRED BY LAW).

Important factors that could cause actual results to differ materially from the expectations set forth in this letter include, among other things, the factors identified in SandRidge’s public filings. Such forward-looking statements should therefore be construed in light of such factors, and the Participants are under no obligation, and expressly disclaim any intention or obligation, to update or revise any forward-looking statements, whether as a result of new information, future events or otherwise, except as required by law.

Open letter to Southwest Gas board of directors